Say “NO” to Congregated Settings,
Say “YES” to Human Rights!

Recognizing the right to live in the community is about enabling  people to live their lives to their fullest within society and access the public sphere, including “small places, close to home.” It is a foundational platform for all other rights: a precondition for anyone to enjoy all their human rights is that they are within and among the community.

The right to live in the community is closely linked with fundamental rights such as personal liberty, private and family life, and freedom from ill-treatment or punishment. Three key elements are choice; individualized supports that promote inclusion and prevent isolation; and making services for the general public accessible to people with disabilities.

This right is violated when people with disabilities who need some form of support in their everyday lives are required to relinquish living in the community in order to receive that support; when support is provided in a way that takes away people’s control from their own lives; when support is altogether withheld, thus confining a person to the margins of the family or society; or when the burden is placed on people with disabilities to fit into public services and structures rather than these services and structures being designed to accommodate the diversity of the human condition.

Placement in institutions is a pervasive violation of this right which calls for a firm commitment to deinstitutionalization. Many more are isolated within their own communities due to inaccessibility of facilities such as schools, health care, and transportation and lack of community-based support schemes.

Revealing the various ways in which this right is violated is essential to ensure that one form of exclusion and segregation, such as institutionalization, is not replaced by another form, such as other, even if smaller, frameworks of congregate care. Creating an alternative in the form of support services that do not enable choice or interaction with the community does not amount to implementing this right either. (Adapted from The right of people with disabilities to live independently and be included in the community Issue Paper: Council of Europe Commissioner for Human Rights 2012) 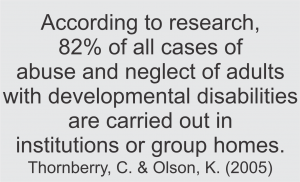 Besides violating human rights, health concerns, and ignoring quality of life outcomes, there are additional pitfalls of congregated settings. It creates an incentive to sustain the institution/program over the needs of the individuals.  It prioritizes operating to increase efficiency, lower costs, reduce staff, maintain fixed rules, etc,  instead of meeting individuals’ needs. Individuals with disabilities are viewed as commodities and patients, not consumers. Money is a driving force even for non-profits, the average salary for a non-profit CEO in the US is $173,942  (When bonuses are included the average is $281,704). The culture of staff in congregated settings leads to complacency, under-reporting of issues, high turnover, and fragmented care for the individuals with needs.

Abuse of residents is likely also related to staff members being overworked and underpaid for monotonous and stressful work. (Verdugo & Bermejo -1997)

When asked about where they want to live as they age, almost all older adults say they want to live in their homes and get the services they need in the community as opposed to moving into a nursing facility.  (AARP Research, “2018 Home and Community Preferences: A National Survey of Adults Ages 18-Plus” (July 2019).

What Are Desired Quality of Life Outcomes?

Instead of seeking to put people in places or programs, efforts should start from the individual out, with a goal of creating desired quality outcomes based on each individual. People with disabilities are people first.

The 1999 Olmstead Supreme Court decision brought civil rights considerations to the forefront and stipulated that individuals with disabilities should be cared for in the least restrictive environment possible in accordance with the Americans with Disabilities Act (ADA).